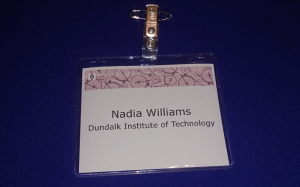 The organisers had notified attendees that the conference would take a non-traditional approach and format. The goal was to not only have a monologue followed by brief opportunity for questions, instead, the goal through the whole conference would be to create dialogue, to give to as well as receive from presenters. All sessions were accompanied by a volunteer mind mapping the talks as they progressed, using ordinary flip chart and markers. 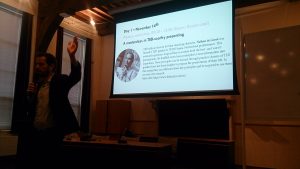 The first session was led by Nathan de Groot, a public speaking expert, who led us through steps and techniques to create excellent presentations.

I selected to attend the session titled “More than Cycling”. Instead of a traditional presentation/questions format, each presenter was given only four minutes to introduce their research, followed by a generous time allowance for questions. The speaker was also invited to put a question to the audience. We then divided into groups and were provided with large sheets of paper and markers for mind mapping. Each presenter then spent two minutes with each group for closer dialogue about their work, followed by an opportunity for the group to map out their thoughts, suggestions, and remarks.

Margot Abord de Chatillon presented on her work in progress, an examination of the bicycle as an object, in particular focusing on how bicycle maintenance affects cycling. Emmanuel Revalet is investigating the rise of e-bikes, what demographic uses them, and whether this new technology is a positive or negative development. Victor Callil is examining the social impact of bicycle use in the city of São Paulo.

I chose for this section to attend the stream titled “Cycling and Mobility Patterns”. The same format was followed, with presenters Isabel Bezerra de Cunha describing a project examining cycling uptake patterns among students at a university. Bas de Geus spoke of the psychosocial and environmental correlates of cycling for transportation in Brussels. Patrick Rérat is also looking at the rise of the e-bike, and its uncomfortable position between the bicycle and the scooter (“bromponie”, in other words a motorbike, not a kick-scooter).

Attendees could sign up for one of two practical sessions giving an opportunity to gain first-hand experience of a research method. One group experienced Virtual Reality, while the other went on an actual bicycle ride through the city of Amsterdam, with detailed guidance on how to observe the experience as an academic exercise. I chose to go with the second group and to that end rented a bicycle. 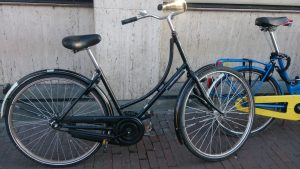 During the exercise I paid particular attention to proprioception as I travelled. Following the bicycle ride, we discussed our different observations in our group. After this practical experience, the whole conference reunited to participate in a debate on the merits and drawbacks of both. The method followed was called the “fish bowl” – three participants formed the panel in front, and anyone who wanted to contribute to the debate could come forward and “tap” someone who had already spoken, so as to take their place. 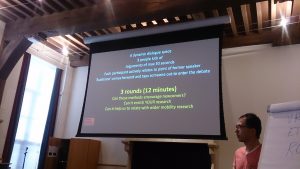 This led to a variety of speakers from diverse academic disciplines contributing. While interesting comments and suggestions were made, the concluding summary was that care should be taken to carefully consider which method is most appropriate to a particular project. Rich immersion is possible through lived experience of reality, but Virtual Reality offers an opportunity to be imaginative with environmental design planning and offers an opportunity to expose someone to the experience of cycling who may refuse to get on a bicycle.

I presented in this session, called “The Image of Cycling”. The format was somewhat different from the previous ones, in that we were given two minutes to describe the crux of our research, four minutes for questions, then four minutes to discuss our methodology and results, followed by a general question session. I described the basic hypothesis I have devised from the literature and data to date, used slides to illustrate my findings, and enjoyed the challenging and stimulating debate. Brett Petzer described his work on bike sharing in The Netherlands, and cultural issues affecting its acceptance. Anna Nikolaeva presented on the interaction between a city’s identity and cycling, and Isabel Cunha discussed research she and her team have done on analysing the potential to cycle in a city.

I opted to join the session titled “Cycling PhD and Masters”, and had an opportunity to interact with fellow early career researchers. The discussion centred on those students who were uncertain or at crossroads in terms of their research focus.

Two workshops were offered, and I elected to attend Designing Dissertation and Books, by Ferdinand van Nispen. Van Nispen is a graphic designer with years’ experience. I was surprised to find that in many European universities, you are expected to have your thesis printed much like a book for commercial consumption. The discussion at this session was focused on very practical direction such as page layout, bleeds, margins, and so on. It was an eye-opener to see theses handled with the assumption that they must be attractive, with a professionally designed cover, and offered as an inviting final product.

I elected to go to the session titled “Cycling and Urban Design”, where Yufei Yuan showed a fascinating micro-simulation tool he and his colleagues are developing to test the viability of shared space. George Lin spoke of using video ethnography in cycling research, explaining the exact details of this method. Justin Spinney spoke of a proposed project he and colleagues are floating for funding, in which they want to include the view of an often overlooked social group in the design of urban spaces: children. Their view of and purpose for travel differs from that of adults, and their autonomous movement is an issue of significant social, psychological, and physical health importance.

The final session of the conference was presented by Antonio Ferreira, and focused on stress reduction and reflection.

I unfortunately missed this closing session for practical reasons.

The conference was overall a wonderful opportunity to see the work being done worldwide in cycling research. The non-traditional format worked well, though as is the case with any new method improvements can be made. No doubt such adjustments will be made, and I look forward to attending next year’s planned conference.