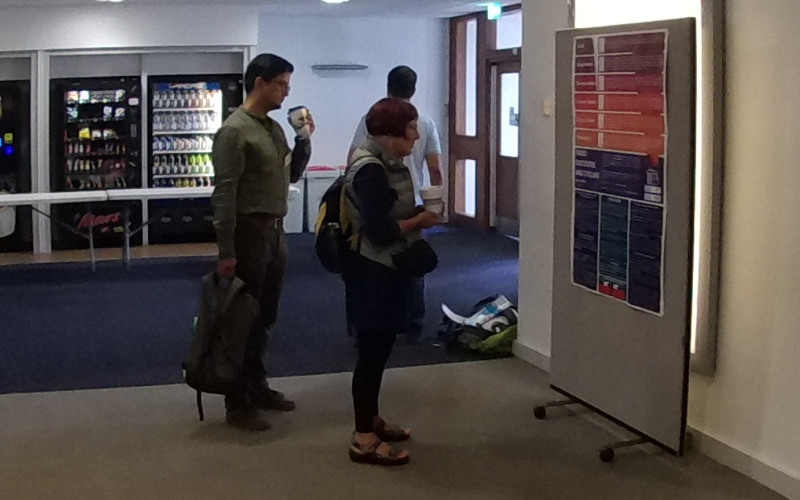 Postgraduate research usually fits into a discipline, such as, say, Psychology, where you can read publications or attend conferences aimed at Psychologists and feel at home. My research project is a little different from most of my fellow postgrads at Dundalk Institute of Technology in that it is topic-specific, rather than discipline-specific. I am in the Creative Media department, and my project is undeniably a Creative Media project. However, rather than examining a specific aspect of media, I am using media analysis and audience perception study as a tool to examine a Sociological concept. Yet I am also not a Sociologist: I am not developing in-depth insight into a Sociological phenomenon. Instead, my research is topic-specific. I am fascinated with the social dynamics related to cyclists, and Creative Media, Sociology, Social Psychology and more are tools with which I explore the position of cyclists in the world.

This left me feeling quite alone sometimes. My peers in postgraduate studies have a common anchor in their discipline, even when their topic focus drifts from that shared foundation. I’ve met nobody else who is instead doing it the other way around: anchored by the topic of cycling and cyclists, drifting from there to a range of disciplines. That aloneness was lifted when I attended the 15th annual Cycling and Society Symposium at the University of the West of England in Bristol.

Research on cycling is a fascinating field, crossing disciplines ranging from engineering to software development to geography to communication to sociology to culture, and more. What struck me is that even talks from people in disciplines far removed from mine were engaging, because the strength of the topic interest that brings us together is exceptional.

In the plenary session, Ben Wooliscroft, from New Zealand, talked about work aiming to understand mobility cultures and their relationship with barriers to cycling. I chose to attend the Communication session after the coffee break (the alternative was Infrastructure and Interactions with Traffic). Kevin Hickman laid bare the world of cycling and disability, with an engrossing look back at an historic design and its modern iteration. Seamus Allison explored self-image barriers to cycling, especially among children. Angela van der Kloof talked on the intricacies of passing on cycling knowledge in The Netherlands.

My own presentation was part of the poster session, which was managed in a structured way I really liked. Following lunch on the first day of the symposium, the 100 delegates divided into eight groups, each with a facilitator who timed poster presenters in a three-minute oral explanation of their work, and a two-minute opportunity for questions. This allowed me to talk of the personal experiences which had motivated my research and the hypothesis I’m testing in the overall project (my poster reported only on an analysis of radio broadcasts related to cycling in Ireland in 2017). The opportunity for a very brief oral explanation to accompany the poster enriched the presentation of my work and allowed attendants to leave with a wider grasp of my central hypothesis and the direction I plan to go from here.

My work was very well received, questions were thoughtful, and a few researchers approached me over the course of the rest of the conference to let me know that their own findings are in harmony with mine. We’re approaching the issue from different perspectives and from different disciplines, and it is very encouraging to see we are independently reaching very similar conclusions.

The afternoon session was themed Inclusion, and offered talks on age, gender, and feminist perspectives, which is of particular relevance in the cycling experience. I was struck by Leticia Lindenberg Lemos’ talk, seeing cycling among women in São Paulo in Brazil as more than a means of transport: it has a knock-on empowering impact on women’s lives.

Day two of the symposium was especially rich and impactful for me. The plenary topic was Digital Technologies and Data. Following the previous day’s pattern there was a choice of two topic streams after tea: I chose Cycling Practices (the alternative was Safety). The joint session after lunch focused on Cycling Cultures. On my programme, I excitedly circled and added exclamation points to five talks.

Yannick Cornet discussed a case study of resistance to accommodation of cycling in a roundabout redesign. The whole analysis just oozed social psychology and sociology in the dissection of what came across as a tragic missed opportunity. Raúl Acosta García presented a thought-provoking look at balance in urban cycling in Mexico: something that goes well beyond the balance required to ride a bicycle. Denver Nixon delivered a captivating talk on grassroots cycling initiatives in two cities: São Paulo and London.

Cristina-Maria Caimotto, a linguist, presented initial findings from analysis of texts about cycling. Her provisional conclusions from a discursive approach were riveting, for me especially in seeing the difference between the method of analysis she follows and my own approach of critical analysis in the Foucauldian tradition, heavily leaning to the style of Roland Barthes.

The final talk of the symposium was Robert Egan’s. His report on his grounded theory study of how cyclists handle the experience of cycling in Dublin was, in a word, captivating.

I came out of the symposium no longer feeling alone. Instead, I feel as if I am in an orchestra. We play different instruments requiring different skills, but what we produce when we read the notes on the page is harmonious.